Today is a very unique anniversary.

The days between Christmas and New Year spark many memories from our time in hospital with Russell. It is hard to believe it was 11 years ago. So much has happened since that frigid Edmonton morning.

We had just said goodbye to Nicole the previous night, as she and her Grandma boarded a plane back to Winnipeg. We were left feeling very empty with our family separated once again. We woke up that morning expecting another monotonous day at the hospital, but at about 8:00 am we were phoned at our hotel with news that would change our plans considerably.

The phone call where we were told that there was a donor heart available for Russell.
11 years later, it still feels like a dream and not quite real.

Susan asked me last night - after all of these years - how do I feel about the transplant? A question that is not easy to answer.

On the day of Russell’s transplant, one would have expected us to be overjoyed with high fives all around. Yes, we were very excited that the transplant would be a huge milestone, but we had been in the hospital for so long we knew the transplant would not be the end of the story.  To be quite honest, we were worried and scared.

At this point in time, we knew Russell still had open-heart surgery to implant the donor heart and the recovery that went with it. We were petrified that we were so close to having a successful outcome that something might go wrong. We were not going to relax until the donor heart was in, and we knew that the surgery was a success.

We never got that confirmation - at least not right away.

We got the call that Russell’s surgery was completed a little after midnight. We met with our surgeon, who did not have encouraging news. The operation was a success, but there were issues with the donor heart. He told us bluntly, “Be prepared for a rough night.”

The next 48 hours, we watched and waited. There were several anxious moments, but very slowly and steadily, we could see signs of recovery. The worst was over, and we could finally get past this initial hurdle, but there were many hurdles yet to come.

11 years later, we have many of the same feelings of apprehension and worry, but with each passing year, we have to look back at the many fantastic opportunities that “transplant” has given us and especially Russell. Russell is slowly figuring out his reality of being a heart transplant recipient. It is a lot for a little boy to process. This is a work in progress, but by outward appearances, he looks and acts like any other healthy little boy. He’s currently playing on the computer - playing video games. We consider it a privilege to worry about his screen time rather than his cardiac health.
Russell also keeps things very real. He is a normal little boy and is downright goofy. It is all of his silly antics that keep us on our toes. In the few moments when we have time to think about something like his transplantiversary - we just say, “Wow.” He truly is a “miracle.” 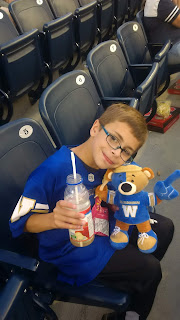