Earlier this week, we had an Emergency Room adventure.  In an attempt to keep our immune-compromised son protected from as many infectious diseases as possible, we make it a priority to get him vaccinated. Because of his medical condition, there are some vaccines that he cannot receive.  The MMR (Mumps-Measles-Rubella) vaccine he cannot receive because it is a ‘live’ vaccine.
However, we do make a concerted effort to get him his flu shot.  This is what led us to the Emergency Room this past Monday.

In the past, our son has had a reaction to the flu shot.  We have questioned whether we should still give him the shot. With the advice of no less than five doctors, we have been encouraged to keep doing it. Now we do the flu shot in microdoses.  The shot is divided into 4 microdoses and given in timed intervals.  If the first shot is given and there is no reaction - we proceed with the next shot.  This process is lengthy, and you can imagine how our son enjoys getting four separate shots.
We took this approach last year, and it went very smoothly. There was no reaction.  This past Monday, we did it again.  There was no reaction until the fourth and final shot. After the last shot, Russell’s skin broke out in hives, and he became very agitated and itchy.  The Allergist who was administering the shots provided an antihistamine, and when she felt that was not working, she then administered epinephrine and called 911.

This engaged all of the resources of the Winnipeg Fire and Paramedic Service.  The first to arrive at our Doctor’s office was the fire truck, with the ambulance closely behind. Yes, it was overkill.

Susan and Russell were quickly escorted into the ambulance and taken to the Emergency Room at HSC - Children’s. Russell got to operate the sirens, which he did think was rather “cool.”
The purpose of going to the Emergency Room was to monitor the allergic reaction and to ensure there was no rebound effect when the effects of the epinephrine wore off. We were there a few uneventful hours and were released. We went home for a much-needed rest. 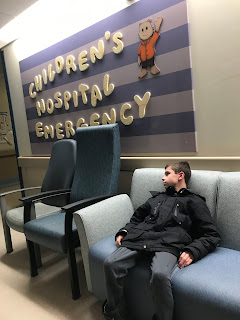 The decision to give Russell a flu shot is not unlike many of the decisions that we have to make as it related to his health care. Managing a child with a heart transplant and kidney damage prompts many discussions about the types and effects of the medications he takes. Most of the medications he takes have the potential to do significant harm to him. We are not alone in this situation, this is the reality of anyone who has to manage a medically complex condition.

Everyone in our home gets the flu shot, so it wouldn’t be a big deal for Russell to not be vaccinated except for the fact that with the increased prevalence of the population not getting vaccinated (thanks to anti-vax hysteria) we now have to worry about every kid with a runny nose who Russell is exposed to at school.

We have a long history of having issues with this.  Our children have been quarantined twice due to measles scares in their school and Russell had to endure a 5-day stay in hospital when he contracted Chicken Pox. Being immune-suppressed makes diseases like Chicken Pox and Measles a life-threatening reality. All thanks to the tin-foil hat conspiracy theorists who think they know better.

Will we give Russell a flu shot next year? At this point - I don’t know. We will have to make that decision in the next few months. Just another choice in a long list of options that we have had to make over the years. It is infuriating to have to face this reality knowing that many of these diseases could be mostly eliminated if people would just vaccinate.

The next time you see a GoFund Me page or a Social Media story about a child with cancer or some significant health malady and you feel a need to support these families?  Perhaps, think about ensuring you and the people around you are vaccinated. You might even prevent getting ill yourself.