Way back …many years ago…I started my first blog.  At the time I really didn’t even know what a blog was.  It wasn't even called a blog.  I was using a Care Page that was suggested to us by our hospital staff.  It was a way of keeping all of our friends and family apprised of our medical adventures when we were unceremoniously uprooted from our tranquil residence north of Winnipeg and became immersed in “hospital world” in Edmonton. 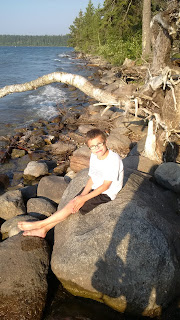 After a year and a half of seemingly non-stop thrills and spills it seemed like the right time to shut down the Care Page.  Time to close a chapter of our life that we would just as soon forget.  Unfortunately, those 18 months indelibly changed me and my family.  I doubt there is a single day that goes by that I don’t think of our experiences in Edmonton.  The PICU, the doctors and nurses, the families, the hotel where we stayed, and even the hospital cafeteria.  Those experiences changed us.

We are still processing many of these experiences to this day.  Some may call it PTSD, I am sure there are many diagnosis that we could come up with.  The impact of our experience was (and is) profound.  Perhaps I dwell on these experiences too much, but that is something that we are working through.  This is a long process that is made even more complicated by the fact that it is ongoing.  The grim reality is that our story is far from over.

August 5th is Russell’s Birthday.  A momentous occasion.  9 years ago he was born on a stunningly beautiful day.  On this day, I wanted to get back to the initial motivation for blogging in the first place.

How is our little boy doing 9 years later?

That is a very complicated question.  I have to admit the first time we went for an ultrasound and found out we were having a son, I think I was like many fathers and was already planning all of our father – son moments.  I think we all do this.  Hearing him say his first word or watching him take his first steps.  Then there were the “guy things” you imagine.   Signing him up to play soccer, learning to skate, going to a football game together…the list goes on.  I was excited to be having a son.  Daughters are pretty cool…but sons are different.  I could imagine all of the cool toys I could justify buying.  Toy guns, Lego, video games….all for Russell….of course.  Although it is unrealistic, I think we all do this, and start setting some lofty expectations.

That all came to a crashing halt when Russell was diagnosed with his heart condition.  In a moment, these visions of father-son adventures had to be significantly altered.  Did I really care that Russell would play hockey? No, it was no big deal…but when someone tells you “can’t” or “never will” is a totally different scenario.  You can’t tell me what I can or can’t do is the attitude many of us have.  It was a very difficult reality to accept that Russell would never do many of the things that other children could do.  He may not have enough cardiac function to run or play like other kids.  He may never ride a bike.  In only a few moments with a devastating diagnosis we now had to adjust our expectations for our son.  Life had played a cruel joke on us.

In the months that followed, things went from bad to worse.  Instead of praying for a normal  life for Russell our hopes were lowered to hoping that he would see his first birthday.  What was worse was that our little boy was struggling.  It is a dark time when you ask your PICU Doc to intubate your son because you can see him struggle for breath and the cries he make are not the typical cries you hear from a healthy infant but a life and death struggle being waged in front of your eyes.

Then we were offered a second chance.  The Transplant

We intellectually understood the concept of the transplant, but understanding what it meant emotionally was a completely different matter.  We asked many questions about what Russell’s life would be life with the transplant and we got many different responses.  It was not talked about as a cure…which it is not.  A cardiac transplant comes with its own complications.  This was something that we would have to deal with forever.  It wasn’t this magical solution.  However, the one word that was mentioned to us…was that it would give Russell a chance to be “normal.”  That word has stuck with me.  Don’t get me wrong…living with a transplant is far from normal…it has many risks and involves lots of management.  What stuck with me about the concept of “normal” was this opened the doors to many things we had given up on.  Our son may be able to run.  He might even play sports.  He could go to gym class in school.  He (we) were being given a second chance.

Since our early days of learning about life with a transplant…there have been many challenges.  The complications that were discussed way back when have certainly become a reality.  In many ways we are living on the edge.  We still have fears about the things we have been warned about again and again.  The fear of organ rejection.  The fear of kidney damage.  Many of the meds Russell takes have many side effects.  Immune suppression is a huge issue as we have to worry about every sniffle and cough, not only with Russell but everyone he is exposed to.  He has had RSV, and Chicken Pox.  He has had to be quarantined at home and could not attend school because of suspected measles in his school.  Then there are the challenges he is having at school.  This past year has been a nightmare.  There could be many reasons for some of the challenges Russell is having with learning and behaviour but we are now beginning to realize that medical trauma, the experiences he had as an infant, may be playing a role as he copes with the challenges in school.  It seems every bit of success we have had has come at a price.  As a parent, it is excruciating to watch your child struggle.  If anyone deserves a break it is him.

There have been so many challenges that it’s difficult to recall them all.  Perhaps it would be better in some ways that we could forget some of them.  However, the bottom line is that we have a son who is absolutely full of life.  I still recall some of his nurses, even when he was an infant, commenting on how such a little boy could have such a huge personality.  They couldn’t be more correct.  He is a real character.  A character who at times drives us crazy.  He is stubborn, strong willed, and at times a holy terror.  It is also often pointed out that it is that stubbornness and strong will that kept him alive.  He has a smile that lights up a room.  He is kind and has many deep feelings.  He is a leader and likes to be in charge.  There are also times where he just wants to be left alone and enjoy his quiet time.  He is a Lego Master Builder.  He spends to much time on electronic devices.  He has a distinct sense of humour.  Like any 9 year old he finds bodily functions hilarious (I’m not going to explain).  Many times he sneaks out of bed early in the morning, and with all of the stealth he can muster he will sneak into our bed and cuddle up with his Mom.  After all; he is a "Mama’s boy."

Every once in a while you have those “A-ha” moments.  With Russell it happens quite often.  He does something that leaves you amazed.  To many parents some of these moments would seem rather benign.  To us, many of these “benign” moments are huge.  Moments that at one point we thought we would never experience.

A couple of weeks ago when we were at the lake.  Both kids were riding their bikes in the campground.  I couldn’t help noticing the smirk on Russell’s face as he went whizzing by us on his bike.  That would have never been possible without his transplant.  The gravity of that moment, makes you very humble as I recall the many people who made this moment possible for him.

Last week I was able to take Russell to his first Football game.  Yeah…he drove me nuts because he can’t sit still for more than 5 seconds but he had a great time.  It was one of those father-son moments that become great memories.  We both had a great time.

I have said this many times.  If there is anything that we have learned in our journey over the past 9 years is the gift of being thankful.  Thankful for our son who has taught us so many life lessons.  The second lesson learned would definitely be to enjoy every moment.  Life is a gift.  We are not defined by our adversities but they are critical in making us who we are.

We have no doubt been changed by our experiences of the past 9 years.  In many ways I feel like I’ve had to do a lot of growing up.  I am looking forward to watching Russell grow up, knowing there are many more chapters to be written about this boys’ remarkable life.