Freedom is something we all value.  We all cherish the ability to make choices even if they may not be the best things for us.  This is especially true of food.  Everyone has that guilty pleasure; be it a juicy hamburger or an ice cold slurpee on a hot day.  We all know that these things are not the healthiest of food choices.  We know they are loaded with fat, sugar, or salt...but every once in a while it feels so good to break a rule and have a small indulgence.  They just taste so good there is good reason we call some of these foods a "comfort food."

IWK Health Centre in Nova Scotia is trying to provide healthier menu items for their staff, visitors, and patients by eliminating several food items that they deem unhealthy.  A very commendable and well intentioned idea.  It is likely that all of us could eat a little better and as a health care institution they are trying to set an example.  I just have a few issues with this policy.

IWK Health Centre is , among other things, an acute care pediatric facility.  As such they will be treating some medically complex kids from all over the maritimes.  I feel very sorry for these kids and their parents.  If you show me a child who has a lot of medical history and has had significant interventions, it is not uncommon that you will find a child with an eating disorder of some kind.

In our own case, Russell was tube fed for nearly a year, as an infant.  After we came home from the hospital we made several attempts to get Russell eating orally and we did make some progress.  We were seen at a feeding clinic where we got some tips on how to transition.  In spite of our efforts, and the support we received, Russell was not gaining weight and earned that often feared title of "failure to thrive."  As a parent you feel like a failure.  An inability to feed your own child is a devastating indictment.  We would try anything just to get him to eat.  As we shared some of our experiences with other "hospital" parents we heard similar stories.  This wasn't uncommon.  One mom shared with us how her son's food sensitivity was so severe that he would projectile vomit foods with textures that he objected to.  In desperation, they would peel skins off of grapes and feed them to her son as this is the only way he would eat.  She would spend whole evenings peeling grapes and fighting tears of exasperation as she did what she had to do to get any kind of nutrition into her son. 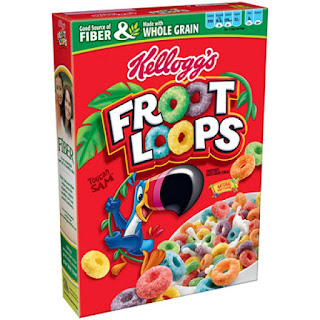 We felt the same exasperation.  What kind of parents are we that our own son is malnourished.  As we tried desperately to feed our son, our doctors suggested a G-Tube.  A surgery would be booked and Russell would have a tube inserted into his stomach so that we could tube feed him on a long term basis.  This was a huge blow.  Not another surgery!  Not another device to have to deal with for months and possibly years.  We had a surgery date booked and we tried desperately to try to get Russell eating to try to avoid another surgery.  With coaching from the feeding clinic we tried every kind of food (and trick) imaginable.  Yes...some foods that were loaded with sugar.  Anything that Russell might like.  We dropped any pretence that we were going to feed him something healthy we just wanted calories in him.  If we could get him eating junk food, then maybe we could get him eating something else.  Quite literally breakfast cereal saved us.  Specifically, Froot Loops.  The boy loved them.  Don't get me wrong.  These things are pure sugar with chemically infused froot flavour.  These things are horrible...but it allowed us to get milk into him.  Milk which he refused to drink.  Our next issue was Russell's kidneys.  His kidneys have some damage and we need to pour the fluids to him. In addition he is on a Potassium reduced diet also because of his kidleys. Working with our nephrology dietician we introduced him to Peach Juice.  The cheapest & nastiest peach juice on the market. It also contains no Potassium (and not much else). For 7 years Russell has been happily drinking this stuff that 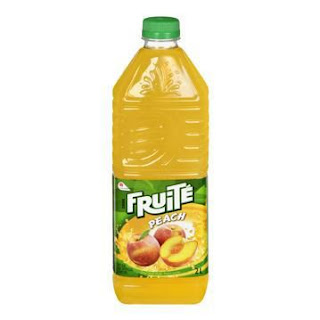 contains nothing but water and sugar and some peach-like flavouring.  This coloured sugary liquid has been keeping Russell's kidneys happily churning away.  Thanks to junk food Russell was able to avoid the G-Tube surgery.  This is not the end of the story.  As time progressed we were able to get healthier food into Russell.  Protein has been a huge challenge but slowly he is starting to embrace meat and that has been a huge success.  However, the progress has been painstakingly slow.  He still has significant eating issues to this day.  He is still very fussy about things with texture or foods that are mixed together.  We suspect this has a lot to do with "control."  Because of his complex medical past he has been forced to ingest medicines and numerous other things that are not exactly pleasant.  Being able to control what goes into his mouth is undoubtedly a huge issue for him.

My concern about what IWK is trying to do is more about their patients and their parents.  Hospital is a terrible place for a child and this is coming from a parent that saw hospitals save his son's life. There are herculean efforts made by child life, social work, and many others to make a hospital stay much more pleasant but the bottom line is that it isn't a lot of fun.  For the patients or the parents.  Is allowing a child the "comfort" of a treat so terrible?  Is allowing Dad the luxury of going to the cafeteria and have a cherry danish (as I have been known to do) something that should be banished.  All the hospital is doing is off loading work onto patients and caregivers.  Parents will bring in food into the hospital that their kids or they themselves prefer.  The hospital just made this less accessible.  Keep in mind this is coming from someone who has smuggled salt packets into my wife's hospital room as they (the hospital) consistently put her on a low sodium diet in spite of the fact that sodium is helpful to her as it relates to her heart condition.  People just don't use any common sense.

I understand what IWK is trying to do.  It is a noble effort.  Yes, we all should eat better.  We get it.  However, this tactic, as well intentioned as it is; is misguided.  This can only serve to further add to the guilt many parents feel about how their children eat.  Children with significant food aversions and eating disorders.  IWK should be coaching parents and helping them and not shaming them because their children do not drink cucumber infused water.

I could imagine what a parent might say to their child if they were in palliative care.  If they wanted a can of Coke....they would get a can of Coke.  Hospitals should be about patients and providing care for them not making what feels more like a political statement.  It seems ironic to me that you would deny a child a glass of ginger ale but then give them a cytotoxic medication that suppresses their immune system.  Doesn't that seem a bit odd?

OK....now who is up for a Fat Boy and a Milkshake?