I haven't been posting a lot lately.  There are a lot of ideas rolling around in my head and I've started writing down somethings but for some reason I haven't been able to complete some of them.  I hope to get that resolved in the next few weeks.

To give you an idea of how behind I am; I am writing a retrospective of 2016 in the middle of February.  Let's just say I'm glad I have no one putting me on a deadline. 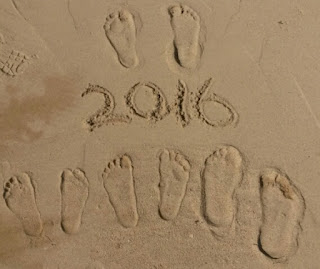 2016 was quite a year for us.  Plenty of highs and lows.  That seems to be a norm for us but 2016 overachieved in this regard.  It is amazing that a year ago we were facing two very stark realities.  Susan was in the midst of being referred for open heart surgery and we were only weeks away from heading on Russell's Children's Wish trip to Florida.  The impending surgery certainly provided an obvious source of stress and concern but the Wish Trip also provided another kind of stress.  How was Susan going to manage the trip in her condition?  There were lots of questions.

Work was also providing some significant challenges.  With the federal election in late 2015, my project was suspended indefinitely.   In January of last year the axe began to fall.  Several of my colleagues lost their jobs.  There was a lot of concerns that more could soon be gone.  I could very easily have been on that list.  Job security certainly hasn't improved since then.

In all of this chaos and uncertainty we proceeded to maintain the approach of putting one foot in front of the other.  I think we have certainly learned how to handle uncertainty in the past 8 years.  However, it is still a huge weight and it is easy to let many of life's challenges get the better of you.  We are all imperfect and fallible.  We are not super human.  At times there are times you have to throw up your hands and say you can't do it alone.  We had no idea at the beginning of 2016 how things would unfold.  Looking back; how things came together was really quite astounding.

In the midst of all of the things going on in our family, there were many tumultuous things going on around us.  We had a provincial election going on in the spring, of which I was involved like I never have been before.  In the states, one of the most vicious and divisive election campaigns was in full swing and would dominate the news the entire year.  It also became evident that Brexit would also have a significant impact on how we looked at our position in the world.  2016 was an amazing year, not only for my family, but for the world.

As I think of 2016 and the events that took place it would be easy to be pessimistic about the future, but I am not.  Each day I have been given with my family is a gift.  Yes, we have challenges but over and over I have been shown that all of these events do have a purpose.  I was reminded of this a couple of weeks ago at sunday school.  Part of the discussion surrounded James Chapter 5.
When I read it, it hit me like a lightning bolt.  I knew this passage well.  It immediately transported me back to the Stollery Children's Hospital.  As you walk into the Pediatric Intensive Care Unit, just to your right, is a quiet room.  In that room hangs a print. There is an inscription at the bottom of the piece that takes an excerpt from James 5:16 - "The effectual fervent prayer of a righteous man availeth much."

I suppose many don't put a lot of stock in prayer...but that portrait meant a lot to me at a very critical time in our lives.  It also prompted me to look up the verse to get some context.  The entire text provides so much more and I think it is something we should remember when we think of all of the unrest that took place in 2016 and as we embark on a new 2017.

13 Is anyone among you suffering? Let him pray. Is anyone cheerful? Let him sing psalms.
14 Is anyone among you sick? Let him call for the elders of the church, and let them pray over him, anointing him with oil in the name of the Lord.
15 And the prayer of faith will save the sick, and the Lord will raise him up. And if he has committed sins, he will be forgiven.
16 Confess your trespasses to one another, and pray for one another, that you may be healed. The effective, fervent prayer of a righteous man avails much.

There is am immense amount of negativity and unrest is this world.  We have significant problems that many times seem insurmountable.  In all of the negativity there are many examples of things we can be very thankful for and take great joy in.  The verses above are a call to action and it's not just about prayer; it is about how we need the support of others, seeking forgiveness, and healing not only in the physical sense but the spiritual.

I know that many who may read this may not believe in God and may think of people of faith in less than redeeming terms.  One of the benefits of living in a free society is that we have the freedom to make these choices and live our lives the way we choose.  Many are skeptical when prayer is offered as a solution to things like illness, as described in the verses above.  The question inevitably comes up "how can a caring God allow such suffering."  I don't have an answer to that and no one does.  What I do know from personal experience is that as a result of my experience and my family's experience is that we are changed people.  You cannot go through what we have gone through and not be significantly impacted.

As I talk to many parents of kids who have passed away or live with medically complex conditions I hear the same message over and over.  "We wouldn't wish what we have gone through on anyone, but the people we have met and the experiences have taught us so much."  It is true that adversity does change us.  Ask any parent of a child with intellectual or physical handicaps what that child means to them and you will receive a response like no other.  These children teach us so many life lessons and give us wisdom beyond words.  The wisdom of lived experience.  That wisdom would never be attained without adversity.

In our case one of the greatest gifts we have been given is the gift of thankfulness.  I have two children who I consider miracles, and a wife I have had the privilege of knowing for almost 30 years.  Every day the four of us are together is something to be truly thankful for.  I can honestly say that in our case the "fervent" prayers of many have "availed" us much.