Much has been made over the weekend about Pittsburgh Steelers Linebacker, James Harrison, confiscating his kids participation trophies.

I have a couple of thoughts on awarding kids just for participating.

My son has had a very difficult first couple of years of his life.  I think the common term is "medically complex."  His medical history has had ripple effects for his development.  He is immature for his age and is overall developmentally behind other kids.  Because of his experiences many of his goals are a little different from other kids.  On the flip side he has skills other children don't have.  How many 7 year olds could act as a guide at Health Sciences Centre? 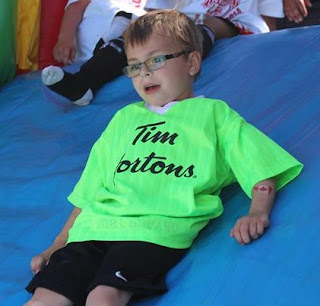 As a result my wife and I have had to adjust our expectations and how we encourage him.  In some instances, for my son, to participate in an activity, any activity, is a huge achievement.  Going to kindergarten was a huge issue for us.  There were times that we had to be pretty tough on the little guy.  I recall phone calls with the school where I had to talk to the principal and to my son and try to negotiate with them and not let my son take the easy way out on whatever task he was having an issue with.  We do need to hold the bar high and challenge our kids to succeed but we also have to be realistic.  Finding that balance is a big challenge.

My son is a really complex little guy.  I am immensely proud of him, he is one of the toughest individuals I know.  If he hadn't been tough as nails he probably would have not lived to see his first birthday.  He is also smart,  Most kids are a lot smarter than we give them credit for.  The know exactly when they have made a big achievement.  They also know when they have failed to meet expectation.  Trophies or certificates are meaningless.  It's how we as parents and adults react and interact with our kids that matters.

Last year my son was in swimming lessons.  He really enjoyed playing in the pool.  From the time he got in the pool to the time he left he had a huge grin on his face.  However, my son does like to make his own rules and listening to the instructor is not high on his list of priorities.  It was very obvious that one of the things holding him back was his fear of putting his head under water.  My wife and I talked to him about this and explained that learning this skill was important and that he would not learn to swim if he didn't set his fears aside and put his head under.  We tried a lot of things.  We would practise in the bathtub at home trying everything we could to encourage him and to address his fears.  He made a genuine effort but never quite got there.  When swimming lessons were done, we expected that he would not pass his level.  This didn't bother us as we were confident he would get it eventually.  To our surprise, our son actually passed his level.  When I checked the certificate and the evaluation I noticed that for this level he had to "attempt" to put his head under water; which he certainly did.  What surprised me was the reaction from my son.  He was angry when I told him that he had passed.  He knew that he was supposed to get his head under water and he knew he hadn't done it.  He took the certificate and threw it on the ground.  He was mad.

His reaction was partially my fault.  I had told him that he needed to get his head under water and he didn't make it.  Kids are smart they figure this stuff out.  With everything in life you need to have balance.  Not every kid gets to be an astronaut when they grow up.  That doesn't mean they can't achieve success in many other ways.  My son's greatest achievement is that he cheated death on several occasions.  He's had two open heart surgeries and has a heart transplant.  All before he was 5 months old.  He has achieved more in his life than many will achieve in a lifetime.  My son's participation trophy is participation in life.