The fun thing about blog posts is that you can be completely self-indulgent.  Where else can you so blatantly be "all about me."

As we approach another Christmas I saw a picture from the Stollery Children's Hospital showing all of the preparations for Christmas morning.  The "Beach" is the play area on the 4th floor which was jammed with presents and all of the other items that will be distributed to the kids in the hospital on Christmas morning.  It really is Santa's workshop.  The amount of effort put into this is truly amazing and it does really make Christmas special for families who are unfortunate enough to have to spend Christmas in the hospital. 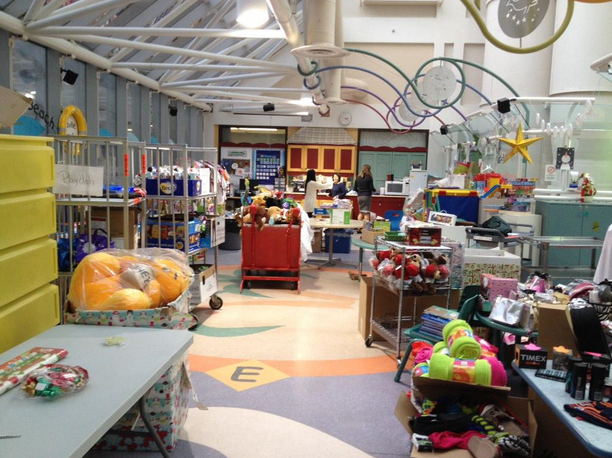 This image reminded me of our Christmas at the Stollery.  Our Christmas wish was very different that year.  We were waiting for a heart transplant and it would have been amazing to have received our donor heart on Christmas, but it was not meant to be.  In fact Christmas Eve we learned that we had been offered a heart the night before but it was too large for Russell by the smallest of margins and it went to another child instead.  A child who happened to be at the next bed.  Our frustration on that do was very evident.  We were especially thankful to a special elf who spent time with is on that Christmas Eve. That special elf was Russell's Berlin Heart brother who was also waiting for a heart.  It was hard to be frustrated or angry when talking to someone who had the exact same issue.

To all of Santa's Helpers at the Stollery who are working feverishly this Christmas...I wrote this note below.  I hope you enjoy!

'Twas the Night Before Christmas

'Twas the night before Christmas, 6 short years ago,
Where we found ourselves, far from our home.
I remember the cold that memorable night.
As our tiny boy, was far from alright.

In the Stollery's care our boy stayed in good stead
His heart beat held steady with a device by his bed.
Our future uncertain, our outcome unknown
A new heart for Christmas; our impatience had grown.

ICU and hospital our new home became
A heart for a transplant became our new aim.
The days turned to weeks and our fate seemed so grim.
The watching and waiting were doing us in.

One offer, then another; not quite a right fit
Could Christmas bring that one special gift?
Christmas day came and went, our gift did not come
Another day had come and gone; unanswered prayers to some.
One day passed and then another, an end not in sight
We doubted and fretted; would our boy win this fight?
But unknown to us the stage had been set.
In a city far away in the Pacific Northwest.

Another young boy was clinging to life.
A story filled with sorrow and unfortunate strife.
The stage was now set; a decision was made.
A call of compassion and plans were well laid

Early that morning just before the New Year
A heart had been found; joy replaced fear.
The waiting was over; a new chapter began
Our gift of new life was all part of the plan.

As I think of this time and memories so fond.
We stop and remember my son's kindred bond.
A selfless choice, by a father and mother.
A new beginning for us; an end for another.

At this time of year I remember our plight
And our special gift that ended our fight.
Our Christmas wish to one and all.
Is of joy, and peace and thanks above all.

Merry Christmas from Donald, Susan, Nicole, and Russell
Posted by Donald Lepp at 9:27 AM