The Summer of our Discontent

A bit of a negative title to this post, but in the grand scheme of things "discontent" is a lot better than horrible or catastrophic.  In reality, we can't complain; no trips to emergency, bloodwork for Russell has been on a two to three week schedule, and only a couple of Doctor appointments.  Considering our track record that's not all bad. 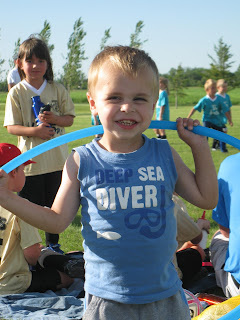 Russell is still wrestling with all of his issues, eating, growing, managing his anemia...these are all still issues; but I think we are making slow and steady progress.  The biggest issue we seem to have with him has mostly to do with him being a very active 4 year old.  The same as every other 4 year old.  He gives his poor mother no end of stress.  This is the same mother who is still feeling significant effects of a broken foot.  Very tough for her to chase him with a significant hobble. 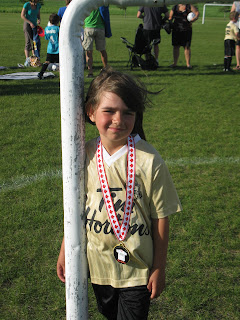 Nicole seems to have mixed feelings about starting Grade 1.  One day it seems that she can't wait to get back to school and other days indicates the thought of going to school every day may be just too much.  As is usually the case with Nicole she will rise to the occasion.  I'm very confident of that. 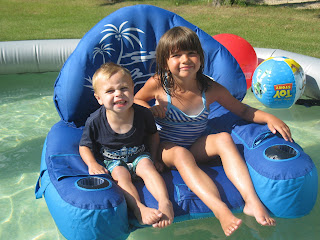 For the most part it has been a very nice summer at the Lepp house.  The kids have been outside lots and have really enjoyed splashing around in the pool.  July was just about perfect weather for that.  We have several friends who are battling with their own health issues and as thankful as we are that we are doing well, for the time being, it is hard to watch others go through things that we are all too familiar with.  Today we know of two little ones who are looking at the real possibility of being listed for a heart transplant.  I now know how frustrating it is for us to follow someone else's story.  When we were posting on our care page and providing almost daily posts on how Russell (and Susan) were doing we had no idea what the effect was on those who read it.  We are beginning to gain an understanding of that now.  The other lesson we have learned is that as similar as these stories are to our own...in many ways they are different as these little kids forge their own path.  We are fearful that the outcome may not be what everyone hopes and prays for.

September is fast approaching (like it or not) and with all of the Fall activities starting up again...our Doctor appointments start up as well.  We just had an appointment with Endocrinology (which went well) and in early September we will be seeing the rest of the "ologys."  We are conducting an experiment. We are going to see Cardiology, Nephrology, and Opthamology all on the same morning.  That should be interesting.  It sounds crazy, but if you can get those all done in one morning and save two other trips to the hospital...that would be awesome.

Stay tuned.
Posted by Donald Lepp at 9:09 AM